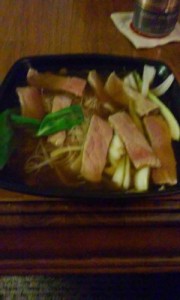 The boyfriend and I share a love of food shows.  Lately, that means watching a lot of Anthony Bourdain shows.  We marathonned The Layover over a couple of days, and you walk away from that show learning two things:

Seriously, he enjoyed a bowl every other episode, and none of those were shot in Vietnam.  Really gave us a craving for the stuff, and I happened to be sitting on this recipe from America’s Test Kitchen.

It’s not totally traditional.  The cook made some major shortcuts with the goal of making this soup approachable for an average cook.  It’s still time consuming and requires a fair few ingredients you may not already have in your kitchen.

The lemongrass was my addition.  And it wasn’t until I was nearly done with the soup that I realized there was no garlic whatsoever in the recipe.  For a moment I thought I’d made a mistake and left it out.  It isn’t really needed, this soup is delicious as is.

The Pho has four major components:

The broth is kept separate until serving, and for this reason can be made in advance.

Break the ground beef into one-inch chunks and place in a large saucepot.  Fill with water to cover, bring to boil over high heat for 2 minutes.  Stir once or twice, but not to much as you’ll break up the chunks and make this harder to strain.  (The purpose of this step is to get rid of the excess fat and proteins that lead to a scummy broth, and to bring out the flavor of the meat.)

Strain out the water, return to pot.

Cut the two onions into quarters.  Set two of the quarters aside, add the remaining six to your saucepot.

Peel the ginger and slice into thin rounds.  Add these to the pot.

This is a good time to prep the rest of your ingredients.  Slice your remaining two onion quarters thin and set aside.  The bok choy, I separated the white stalks from the green and sliced those.  Cook your noodles according to package instructions, or cook in boiling water for a few minutes until they’re almost tender.  For the steak, leave raw, slice about 1/8 inch thin.

Drain the noodles and set up your bowls.  Start with the cooked noodles, then your vegetables on top, and finally the raw steak.  Don’t worry about the raw meat so much, the broth will cook it.  (If you’re really squeamish about it or just don’t like rare steak, go ahead and cook it with your favorite method.  I wouldn’t recommend going any further than a medium doneness, and still slice the steak thin when you’re done.)

Once the broth is done simmering, strain through cheesecloth and return to pot.  Discard all solids.

Taste the broth and add salt and sugar to taste.  You’ll want to overseason this a little bit, as the other ingredients in the soup will cut down on the salty taste.

Bring the broth back up to a rolling boil.  Ladle into each bowl and watch the steak cook before your eyes.  And you’re ready to serve!

Yes, this is a time consuming soup but soooooo worth it.